India facing the ‘worst water crisis in its history’ 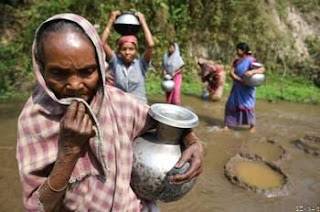 India is facing its worst-ever water crisis, with some 600 million people facing acute water shortage, a government think-tank says. The Niti Aayog report, which draws on data from 24 of India’s 29 states, says the crisis is “only going to get worse” in the years ahead. It also warns that 21 cities are likely to run out of groundwater by 2020 despite increasing demand. This would also threaten food security as 80% of water is used in agriculture.

Indian cities and towns regularly run out of water in the summer because they lack the infrastructure to deliver piped water to every home. Rural areas are also badly affected by a lack of access to clean water. Around 200,000 Indians die every year because they have no access to clean water, according to the report. Many end up relying on private water suppliers or tankers paid for by the government.

As cities and towns grow, the pressure on urban water resources is expected to increase – the report estimates that demand will be twice as much as available supply by 2030. Water scarcity would also account for a 6% loss in India’s gross domestic product (GDP). However, states that are ranked the lowest – such as Uttar Pradesh and Haryana in the north or Bihar and Jharkhand in the east – are also home to nearly half of India’s population as well the bulk of its agricultural produce.

Your Ads Can always be here.

How To Apply For Yaba Tech Transcript

Avid Blogger and Tech Savvy usually found with his computer pouring and keeping in touch with the outside world. When he's not online, you will most likely found him reading.

Nigeria Shuts Down Chinese Company In Abuja Over Water Pollution

Strike: You Must Be At Work From Monday – FG Issues Strong Warning To Workers

We love to hear your opinion. Leave a comment below.Cancel reply

Nigeria Shuts Down Chinese Company In Abuja Over Water Pollution

My Tweets
Currently Playing
No Result
View All Result